Please come and join us for any or all of these service times:

We are a friendly group of people who truly enjoy our church family and the fellowship we have.  We look forward to meeting you and hope you will take a moment to meet our Pastor. 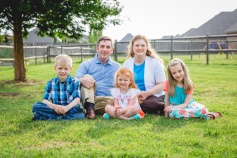 Pastor Glenn was saved in 1977 at the age of 7.  He attended Heartland Baptist Bible College, and graduated in 2006 with a double major in Biblical Studies and Youth Ministry.

He married His Wife Brandy one week after graduating and now has three children: Aaron, Cayla, and Jessica

After graduation Pastor Glenn served in Woodinville Washington as the director for the Jr High program at Woodin Valley Baptist church.

In the Summer of 2010 Pastor Glenn Joined Highland Park Baptist Church as the Associate Pastor. Pastor Glenn was ordained to the ministry on July 23rd 2011, and was called to pastor Highland Park baptist church in July of 2017.Pastor Glenn is excited to watch as God does a mighty work in this church.